Much to the delight of the SEO industry, Shopify have been asking some questions of what changes people would like to see on the platform. There have already been some massive changes, alongside some suggestions of future changes, so we’ve run through what’s happened so far and what we’d love to see happen in the future to make Shopify as SEO friendly as it can be.

Shopify SEO changes being made

Shopify have announced that they will be supporting language subfolders for domains; previously this level of targeting was only possible through subdomains. Although the subdomain vs subfolder preference in SEO remains a hotly debated topic, this new option will certainly be a positive.

Alongside this, Shopify have announced that hreflang will be auto-generated. This is another massive step in the right direction and will go a long way to helping a large number of online stores selling internationally.

See more on this announcement and functionality here.

Of course, as SEOs we have to have something else we’d like to be implemented and this is no exception. As some SEOs have already pointed out on Twitter, the ability to target at a country level would also give another level of granularity that some international stores desperately need. 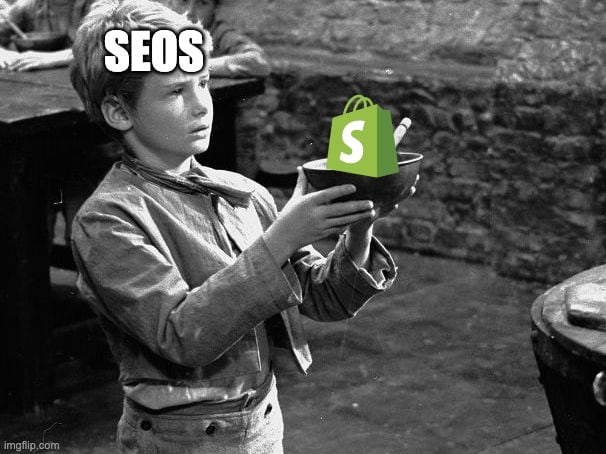 View speed changes in one dashboard

Page speed has been on the agenda for a long time now in SEO – and if you have access to several Shopify stores as a Partner, you can now see an overview of how each is performing. This can give you an overview of which need to focus on improvements, and which are lightning fast.

Shopify have also been asking the Twittersphere what use-cases they would like to see for robots.txt changes. It’s unclear at this stage whether robots.txt will be fully editable in Shopify, or whether it will only support some pre-defined parameters.

Here at NOVOS, we’d love to see a fully editable robots.txt, but can understand the reluctance. Shopify has grown in popularity due to its ease of setup and it’s SEO limitations can often be a benefit to webmasters not well-versed in SEO. For example, not being able to block your entire site from Google in robots to some may well be a big plus!

One of the first things we look to change when we get a client on Shopify is their internal linking product set up, which by default links to products with their long collection URL, rather than the simple product URL.

Long product URLs have canonicals to prevent duplication, however, can cause an excessive number of URLs to be crawled on a site, in addition to relying on canonical signals rather than direct internal linking.

Currently, this can be done, but again it requires some tweaks in the liquid files which not everybody is comfortable in doing.

Obviously, some people prefer having the collection name in product URLs, however, having the option to switch to simple product URLs only would be a massive benefit.

The inability to currently create sub-collections can have implications for determining a hierarchy within a site and therefore impact SEO.

Whilst hierarchy can be implied by certain internal linking changes, the ability to add sub-collections (without having to adopt a headless approach), would be another feature available from other eCom platforms we’d love to see in Shopify.

For such a common thing in website design, it’s surprisingly difficult to add breadcrumbs in Shopify if you’re not confident with editing the liquid files.

Having a simple option to add breadcrumbs to a Shopify site without editing the code would make things a lot easier for SEOs & webmasters alike.

Alongside the easy addition of breadcrumbs, making the customisable to allow for the creation of a hierarchy, both for collections (thereby creating a sub-collection based on internal linking), and for products (to allow for higher collections & subcollections to be linked to) would also be of great benefit.

As is the case with most of the things in our wish-list, this is already possible to a certain extent, however, requires a lot of configuration and additional coding.

To have this option by default in Shopify would be a massive SEO benefit and widen the benefits to all webmasters, regardless of coding ability or familiarity with liquid files.

Although there is a workaround to create customisable XML sitemaps in Shopify, having the ability to do so without a complicated “hack” would be useful in situations such as migrated to Shopify in which old sitemaps can be useful to be hosted to process redirects, or when other workarounds have been used which aren’t automatically added to the Shopify default sitemaps, such as indexing variants.

What next for Shopify?

Whilst we believe that the beauty and popularity of Shopify has very much been due to its simplicity, we believe there’s a happy medium to be reached in terms of additions to boost SEO, without being detrimental to what has made Shopify great at its core.

With new changes coming out all the time from Shopify (Facebook Shops & Pinterest channels to name a couple), and a new approach to helping improve SEO on the platform, we’re excited to see what comes next!

If you’re looking to optimise your Shopify site and take advantage of any changes as they’re released then check out our Shopify SEO services.

Get your slice of the Shopi-pie

We're eCommerce specialists for a reason, get in touch with us today and find out more.